← more from
endectomorph music
Get fresh music recommendations delivered to your inbox every Friday.
We've updated our Terms of Use. You can review the changes here.

by Great On Paper 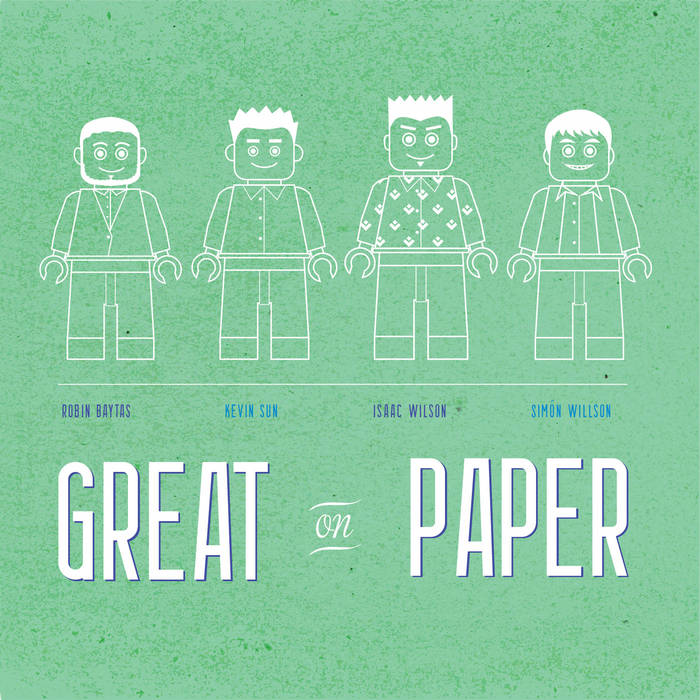 After several years spent rehearsing out in the Boston tundra, Great On Paper decided it was now or never—hence, this album.

A spare, unembellished cover of a chorale by French ornithologist, organist, and synesthete Olivier Messiaen (“O Sacrum Convivium”) and an irreverent roasting and peeling of a Fragos-Baker-Gasparre chestnut (“I Hear a Rhapsody”) round out the album.

The sine qua non of today’s postmodern music is eclecticism: music for everybody and no one. Is this it?

Thanks to: All our parents, all our PayPal patrons, Ted, Ken, Lim, Miguel, Rio, Ethan, Diane, Addison, and Randy Toboggan.

Founded on the principles of equality, freedom of speech, and reckless exploration, Great On Paper is an improvised, four- person party that goes into musical situations without an exit strategy, a typical jazz quartet configuration with a distinctly atypical bent towards the avant-garde and the folkloric, and taps into the jazz tradition without getting too ideological or self-conscious about it. ... more

Bandcamp Daily  your guide to the world of Bandcamp

Frayle's Gwyn Strang and Sean Bilovecky join the show to talk about their cathartic new album.